It began one chilly September morning at Lake 32 of the Cotswold water park,  near Cirencester. Myself and client Grant lined up alongside the other novice triathletes our feet immersed in cold muddy water at the edge of the lake. The starter gun went and 20 minutes later I was the last one to emerge out of the water, so had a lot of catching up to do , cheered on by my the girlfriend Jenni I jogged to transition area one struggling to get out of my tight wetsuit. My bike was easy to find as it was the only one left ! The cycle, luckily my strongest event. Over the next 20k I passed a few fellow triathletes and arrived unscathed at transition number two. My legs were heavy from the effort on the bike but at least I was on dry land. I set off on the run of 2.5km, twice around the lake that I had been swimming in just under an hour ago. I finished, flopping over the line only to see my client Grant waiting for me (he is a very strong swimmer). We received four medals that day,  two official ones and two gold chocolate ones from girlfriend Jenni. I learned so very much from my first Triathlon.  Would I do another one ? I have and will continue to do so, it was so friendly and the sense of achievement massive!! 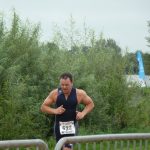 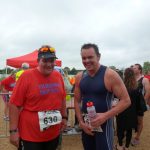 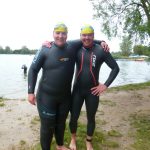